[ COVID-19 ] For all the latest information on COVID-19, go to the official SA COVID-19 resource portal : sacoronavirus.co.za

What is a quagga?

In order to follow progress over time and through generations, as well as to provide a quantitative basis for removals or translocations, it is necessary to have a method of scoring the number of stripes in different regions of the zebra’s body. This method needs to be simple to apply in the field and appropriate for our purpose. 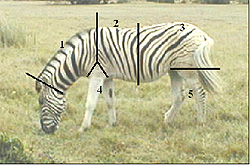 The body is divided into five regions as shown in the illustration above. Stripes are counted seoarately in each of these areas using the following criteria:

Progress over the last 20 years:

To follow progress over time, a generation (F) number is allocated to each animal. As not all animals are the simple progeny of, for example, first generation matings or pure second generation matings (like Tracy, a ‘pure’ second generation animal), the generation number of an individual was scored as the total steps through all members of the lineage from the original founder animals to the individual, divided by the number of contributions from founder individuals. This can results in a fractional F number, so individuals are mostly grouped into integral number generations by rounding their F number up or down accordingly. In an example of a complex pedigree shown below, the foal FR08 has an F number of 3.9 (a total path length of 51 divided by 13 founder contributions), which when rounded up makes this a fourth generation animal. Note that FR08 has a good mix of founder genes, except that founder Alex is somewhat over-represented with three contributions to the pedigree, and Allan, Lulu, and Ike contribute twice each :

In the table below, the average number of stripes in each of the areas depicted above, and background colour (on a scale of 0-3, 3 being white) are shown for each (rounded up) generation of project animals :

This is also shown graphically for the key areas of hindbody and legs below, and demonstrates the successful effect of selection on progressively reducing striping in these critical regions: 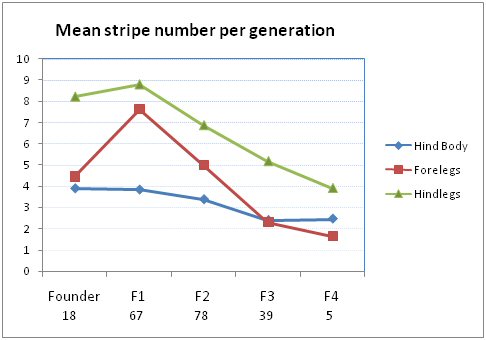 As expected, there was no significant change in comparative stripe numbers in the neck and forebody regions. A similar decrease in striping over generations was also recorded in a subset of the project animals by Parsons et al. (S. Afr. J. Wildl. Res. 37 (2007) 105-116) using a computer-based analytical method. Background colour estimates have so far shown no progressive change over time.

In order to help select which animals to remove from the project and which to retain, periodic assessments of all individuals were made, as in the diagram below, with those having more stripes becoming candidates for removal: 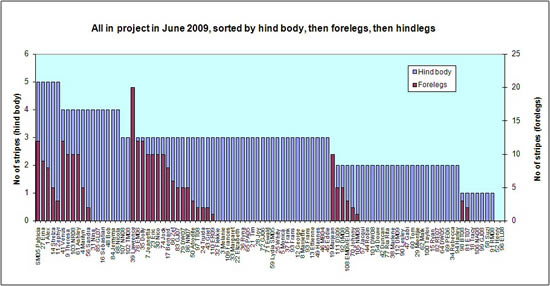 However, in the final assessment note was also taken of the breeding value of individuals, estimated as the mean number of stripes in the critical regions of their foals. This is illustrated below for leg scores in a set of stallions who had sired two or more foals. Clearly the stallions Ryan and Sebastian have excellent breeding potential, and would be retained whatever were their own personal scores. 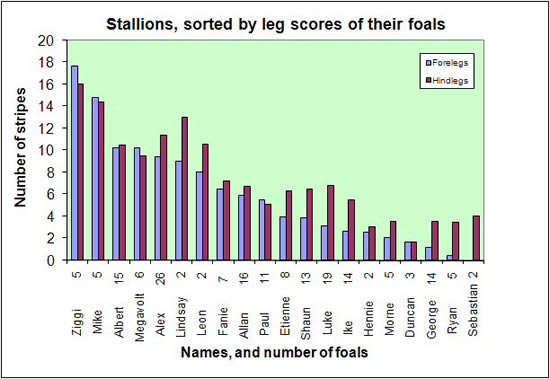 It was interesting to see whether there was a good correlation between personal scores and the mean scores in offspring. The graphs below show that there is a correlation, but that it is not that strong: 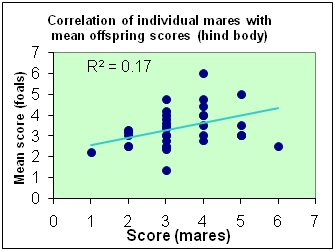 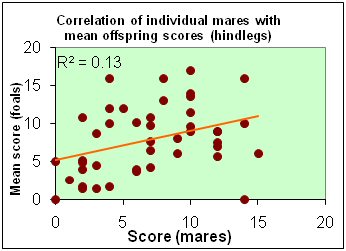 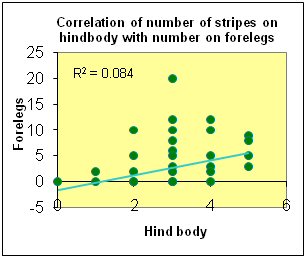 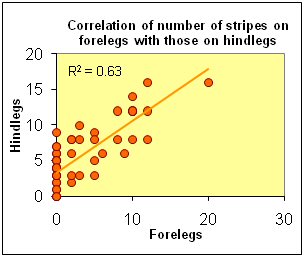 As a practical illustration of the project’s progress, the montage below compares one of our better third generation animals (top left) with, to its right, two typical Plains zebras, in the centre from the extreme Westward part of the species range (Etosha) and on the right from the extreme Eastward part, and, on the bottom row, two representative museum quaggas; on the left, the Munich quagga, and on the right, the Tring quagga. Apart from the few residual stripes on the hind leg of the project animal, the striping reduction is at least as pronounced as in the Tring quagga. The background brown colour is not so well developed as in either museum example, but this is such a variable feature in the museum specimens (of which there are 24 in all), that this is only a secondary concern for the project. 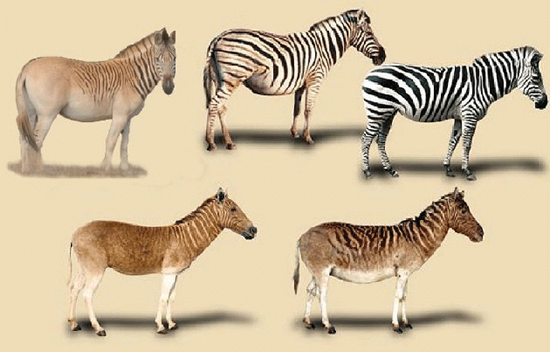 It is necessary, of course, to have a criterion for deciding when the project has achieved its goal. It has been decided that when an animal is achieved which has no scorable stripes on the hind part of the body, and no stripes on the legs, then it qualifies. Accepting that we are only selecting for this set of attributes of the original quagga, and not for any other genetic features which may have been possessed by the original quagga population, we will then term this a “Rau quagga”, the qualification giving acknowledgement to Reinhold Rau, whose vision and drive inspired and guided the project in its initial stages.