“Reinhold Rau is one of the last of his breed … …”. So begins the beautifully crafted article in the New York Times Magazine of 01 January 2006. In it, the author interleaves the character of the man and his adopted country with the history, scientific integrity and progress of the Quagga Project. It is an interesting read about a project that has captured the global imagination … … for its vision is the reversal of human stupidity and failings, a way to put right the wrongs of the past. Reinhold was more than your typical one-eyed conservationist, whose focus falls solely on a single species or on a single habitat. I would certainly rate him as one of the most famous of modern South African natural historians. He was not a university-trained scientist but rather a scientific educator, whose aim was to involve people in the joys of scientific exploration and discovery. 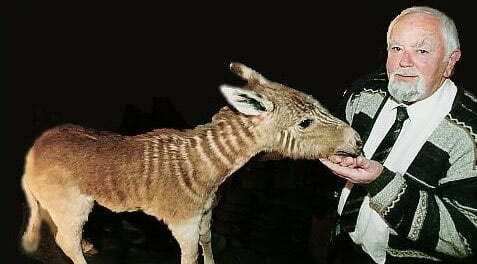 Reinhold Rau was a modest, shy and humble person, much appreciated and dearly loved by his colleagues at Iziko-South African Museum. He is not only part of the history of that institution, but also an integral part of its very fabric, for you can see his hand at work in all the displays. Born near Frankfurt (Germany) and trained as a fossil preparator at Senckenberg Museum, he joined the South African Museum in 1951. In the ensuing years he embarked on the construction of a number of major displays: reptiles, birds, fishes and mammals. It was during the latter (1969) that he re-mounted the quagga foal, the only extant specimen in southern African museum collections of an animal that had once been numbered by the thousands across the plains of the Karoo. He fortuitously collected samples of dried tissue from the foal’s skin, which, together with additional tissue samples from the two Mainz quaggas that he re-mounted in 1980/81, formed the basis of the DNA analyses undertaken by the University of California (Berkley). Results from these investigations showed that the quagga was merely a southern population of the Plains Zebra. With perseverance, quaggas could be resurrected by selective breeding. This formed the scientific basis on which the Quagga Project was founded. Further details can be found on this website, which has been voted one of the best educational sites on the internet.

However, Reinhold was much more than just a “quagga man”. He had over 50 scientific publications to his name. Some have to do with display techniques; some with anatomical detail and the interpretation of the fossil record; and some describe and discuss his other conservation projects: for example, his re-discovery of the geometric tortoise, thought to be extinct, and the identification of its unique habitat; or the recognition of wetland degradation on the Cape Peninsula and the ecological replacement of the Cape clawed frog (Xenopus gilli), by its more vigorous congener, Xenopus laevis. Both of these projects have led to the establishment of reserves in which the protection of the particular species is guaranteed.

Reinhold was involved with empowerment before most of us had heard of the term. In the early 60’s, he was responsible for the appointment and training of taxidermists from disadvantaged backgrounds. He became extremely active in the Technical Committee of the Museums Association in order to ensure that these trainees might become fully certificated members of their trade. Likewise and for some 30 years, he was involved with the German Life Saving Association, teaching young non-swimmers the skills of survival and community service in the Athlone swimming pool.

So, do not look for the soul of Reinhold Rau among the dead – he is not to be found there; rather look for him among living things, whether these are people or tortoises or frogs. Or better still, search for his spirit in some place like the Karoo National Park, when in the cool of the evening, quaggas, which were once thought to be extinct, come to drink at the waterhole – as they were always meant to do.